“The Homicidal Hairstyle of the Viral Video Vixen.” Coming soon!

“The Murderous Haircut of the Mayor of Bel Air.” The opening chapter – FREE SAMPLE! Buy it today as eBook (APPLE, BARNES & NOBLE, GOOGLE PLAY, KOBO), or paperback ( IndieBound.org or Bookstore.org). 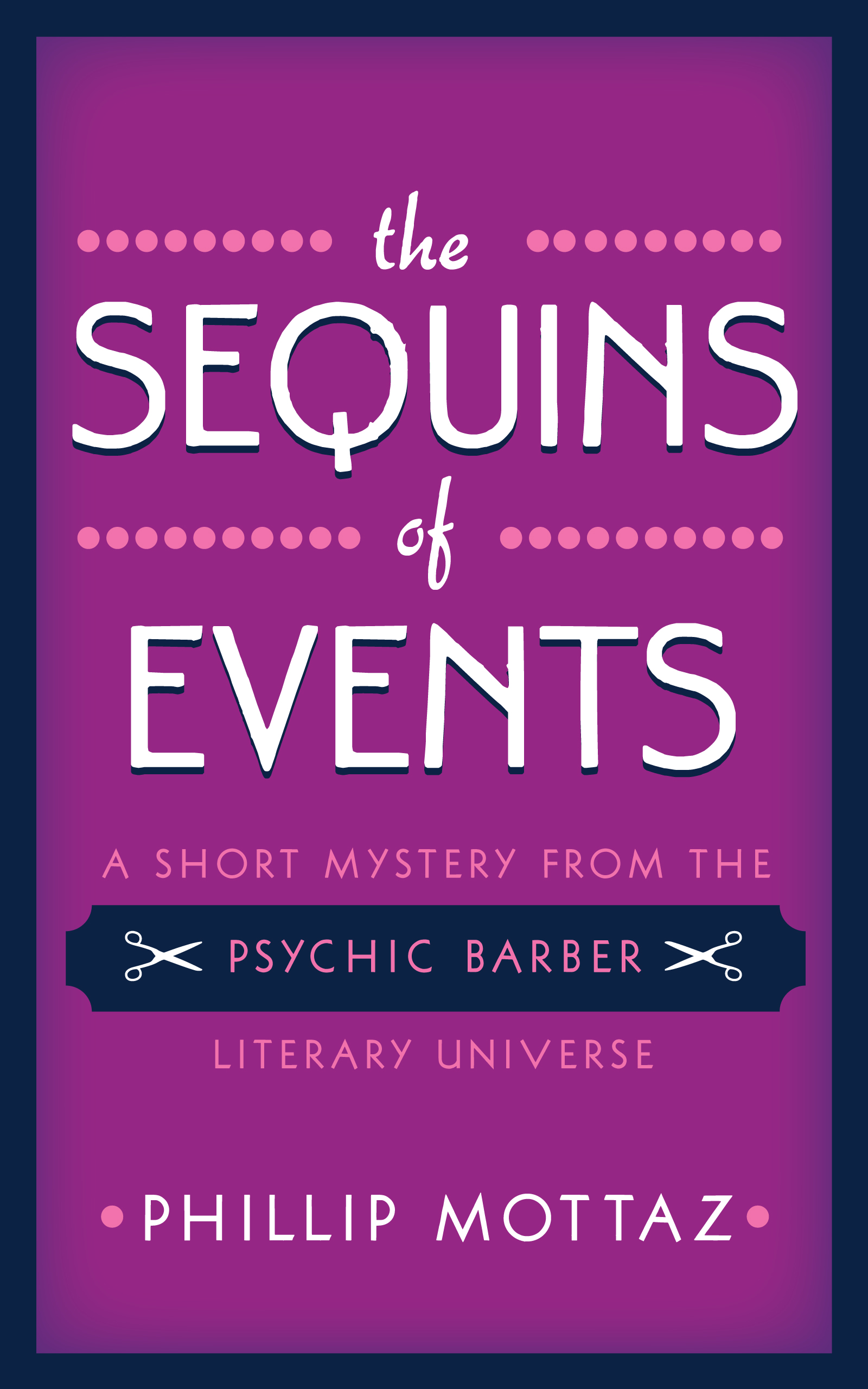 “THE SEQUINS OF EVENTS” (full short story). From the Psychic Barber literary universe, it follows star-on-the-rise/hairstylist Gene in his own mini mystery. When Gene arrives to perform at a karaoke birthday party, he discovers that a theft has put the festivities in danger. Available for free through Apple Books, or pretty cheap everywhere else. (email if you prefer an ePub doc).

“PEARLS BEFORE FINE” (full short story). ALSO from the Psychic Barber literary universe, but this time about semi-reputable private eye Malcolm Fine. This short adventure follows Malcolm as he tackles the greatest challenge yet: fulfilling a tax obligation by doing actual detective-type work. Available for free through Apple Books, or pretty cheap everywhere else. (email if you prefer an ePub doc).

“VILLAINY” (full short story). An up-and-coming supervillain agrees to meet her older rival, and kill him in the process. (email if you prefer an ePub doc).

“ACTING COACH” (comedy feature, first 10 pages) To save the high school drama program he loves so much, egocentric teacher Arthur Curtains becomes coach of the varsity basketball team, forcing his theater philosophies on the jocks to turn them into winners.

“FIGHT Car“ (TV pilot, sample 5 pages). A parody of “KNIGHT Rider,” a talking car from the 1980’s gets reactivated in the 2010’s, bringing all it’s amazing crime-fighting technology such as car phones, computer maps and power windows.

“WE’RE A BAND NOW“ (family feature, sample 5 pages). While driving their son back to sophomore year of college, a husband and wife form a rock band.

“DO NOT STEP HERE” (comedy short). A puzzling sign near the break area torments an office lackey.

“Dogs For Hands” (animated sketch) Trippy. A surgeon finally has his dream fulfilled when he has his hands replaced with living dogs.

“Horse Soap Dispenser” (animated sketch) Maybe the grossest thing I’ve ever written, we finally find out what it takes to get the last bit of soap out of the dispenser (NSFW)

Some thoughts on writing, but mostly about Batman, “Star Wars” and the Rolling Stones.

Random Thoughts on “The Godfather, Part 2”

Yes, we’re back to this. Again and again, I keep examining these movies. What can I say that hasn’t already been said? Well, I’ll try to surprise you. Mostly because these are almost entirely nitpicks and complaints. Anyway…  1. Cazale Got Stepped Ova! No disrespect […]

On a total whim — or as “total whim” as it can be for something that is almost perfectly designed to entice my eyeballs — I watched “Pistol,” the mini-series about the Sex Pistols, directed by Danny Boyle. Here are some random thoughts about that […]

Something went wrong. Please refresh the page and/or try again.

Processing…
Success! You're on the list.
Whoops! There was an error and we couldn't process your subscription. Please reload the page and try again.
Loading Comments...